THE 13 FAILURES IN THE 13 YEARS OF THE SPLM MISRULE 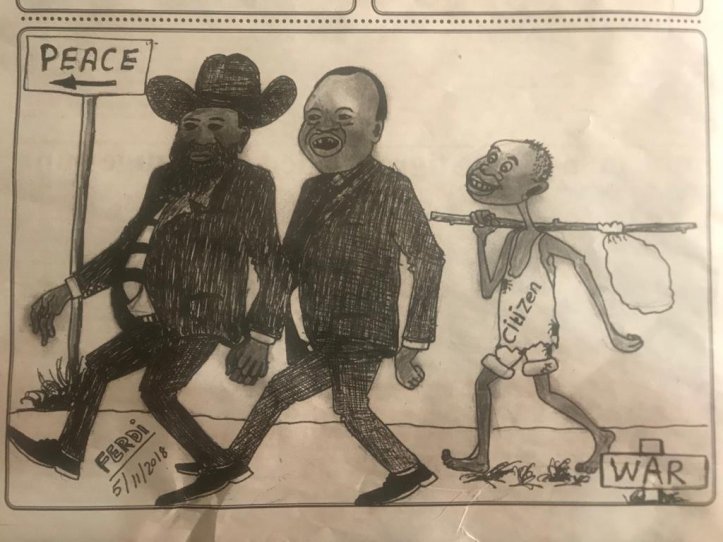 As you continue to ignorantly shout SPLM oyee, it’s imperative to know these facts of 13 years under SPLM led government.

1. The country still operates on generators with no electricity.
2. South Sudan has no oil refinery for the local consumption and the state continues to rely on importing fuel and petrol something that has rendered the local prices very expensive even when we produce crude oil in our own country.
3. South Sudan national university, university of Juba isn’t in ranking of top 20 best universities in Eastern Africa let alone Africa and the world a clear indication of negligence of education sector in our country.
4. South Sudan still imports onions, tomatoes, cabbage, maize, wheat, rice, sugar, meat and milk from neighboring countries because the SPLM led government doesn’t prioritize agriculture.
5. South Sudan is the country where the government officials starting from the president, Vice President, ministers, undersecretaries, directors, heads of corporations, heads of organized forces bought houses or rented houses in neighboring countries of Uganda and Kenya and every month empty the state coffers, send all hard currency to their families and cry foul that we are under economic crises.
6. South Sudan capital Juba doesn’t have clean tap water and at time I write this, the residents of Juba rely on un purified, untreated Nile water usually sale by Abesh and Eritrean for drinking, cooking and showering.
7. Juba National capital doesn’t have a well developed sewerage system and every house in juba direct bathroom pipe to the road and when it rains all the suburbs stinks of dirts, flies everywhere.
8. SPLM Led government have not construct any single tarmac road as a project funded by them and most of the roads have now turned into rivers and before you readers make any claim, please borne in mind that Nimule high way was funded by USAID money, contracted a company called ANTE to construct it.
9. Under the SPLM Led regime 75 officials stole 4 billion U.S dollars public money and the most fascinating part of it, is that non has been held accountable or prosecuted as thieves are freely living like kings and queens at the expense of the impoverished citizens, a result of corruption that has consumed and shattered the dreams of the young nation.
10. South Sudan has no good health facilities and any time government official falls sick even if malaria he/she gets transferred to Nairobi or Kampala or abroad for better treatment while the citizens who can not afford treatment outside South Sudan die or live at the mercy of death.
11. South Sudan national security arbitrary incarcerated people because of expressing their political opinions, arrest journalists and killed them for reporting evils deeds of the state, hold citizens in prolonged detention without no charges, torture and hold people incommunicado for month or years and with no due process, something that is against the constitution and a clear violation of fundamental freedoms and human Rights.
12. Over 2 million people as refugees inside and outside South Sudan, 400,000 people lost their lives and established state own unknown gunmen increasing the death toll with no little care for humanity. All these happening under SPLM led government

This is not fun, it’s failure, lack of vision of the regime aided by the ignorant populace that do not know what basic services should their government deliver to them, failed to put their government on check.

Note: these are only basics that I have mentioned here, there’s whole lot that has gone wrong!