What is happening in Juba this week is being sugar-coated and made to look like a celebration of peace. But, in its essence, it is nothing more than a convention of criminals. The ‘celebration’ is designed to tell the international community that we are united as one nation. Yet, we remain highly divided. What is there to celebrate?

Millions of our people are displaced, scattered across East Africa. Others are stuck inside the walls of United Nations camps, in their very own home-country. Those who are not displaced are not unaffected. Family members have been killed and the normal life that people were acustomed to have been destroyed.

Has President Kiir ever visited a United Nations camp? Has the First Lady ever visited the displaced of our country? Have the rebel leaders done either of the above?

How will the wives of dead soldiers feel tomorrow? I fail to believe that they will watch with joy as the murderers of our nation prance about on national television. They will watch those who stripped them of their very life.

Is that a celebration? I do not consider tomorrow’s event to be a celebration. I deem it a line-up of the crooked, corrupt and culpable of our nation. As they dance with excitement at the prospect of new job titles, do not be fooled. The people you see tomorrow are guilty. Peace has been declared not in the name of the cessation of conflict, but in the name of oil-money.

Rebels will be returning to Juba under the terms of the peace agreement of Khartoum where it was said that five vice-presidents would be ushered in. They will work with Presient Kiir to end war across the country, supposedly. In all honesty, they are returning for their own economic gain. They’re back to enrich themselves, back to loot, back to embezzle. Isn’t that what we expect from these criminals?

Don’t expect change just because of a celebration. But also, do not forget hope. Push our new leaders to visit those in need and do not be afraid to stand up for the positive change that we need after almost five years of conflict. I have reservations about our new leaders but still urge them to make a difference. If they are able to fix the country, allow them to do so. After all, every peace agreement comes with a compromise.

You, as South Sudanese people, must now work together. The celebration tomorrow won’t show unity to the international community, but working together to correct our problems will. 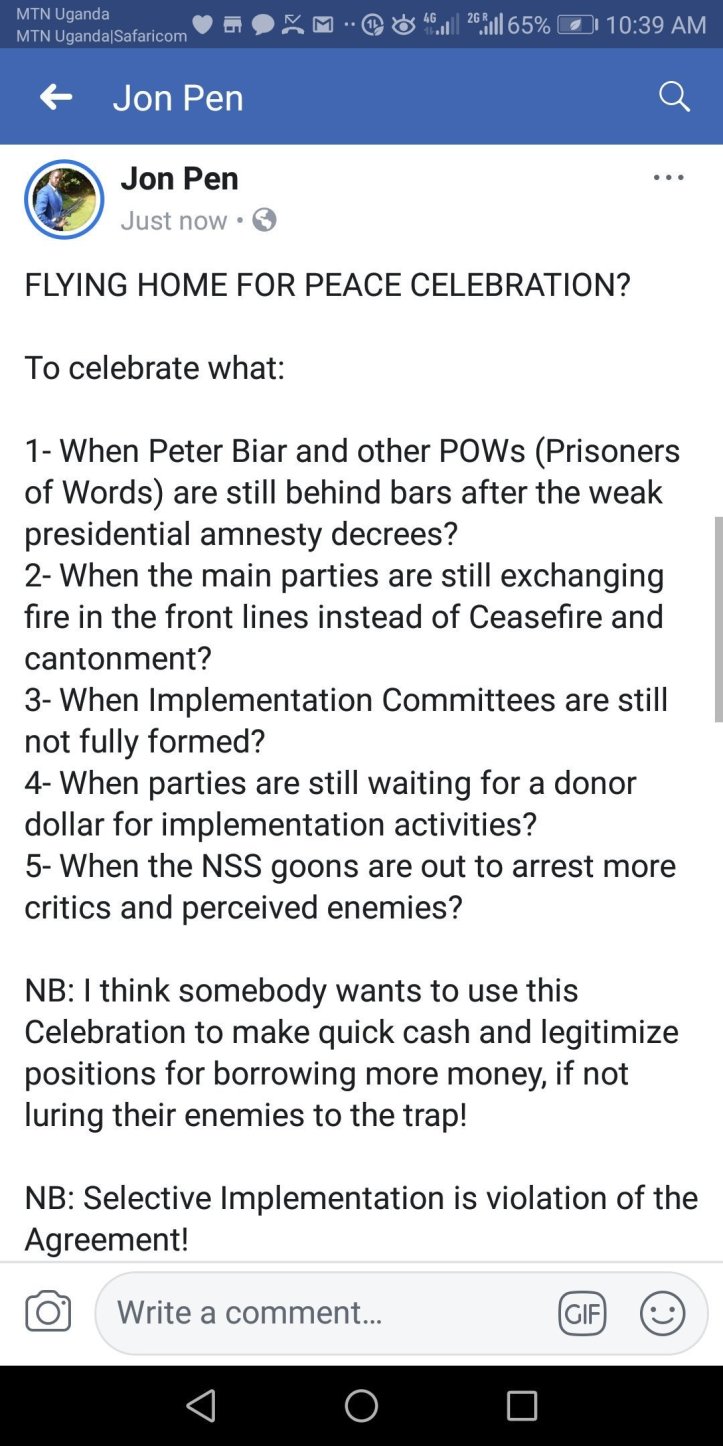 Peace celebrations
——————-
The experience might be a bitter one. The $3.1m we spent is by design. All predetermined and allowed to be spent and invested in such celebrations!
No doubt, the smiles at the roundtable celebration of the leaders on that day, will definately be a disappointmentw for the general population. Because we
have not yet reconciled our general population with their trauma in terms of provision of their basic needs; including their sorrow emotions for the lose of their dear ones! This is an undeniable necked truth.

In these celebrations process, two contradictory situations will represent themselves:
1. We the leaders and the gun holders will be somehow happy for the war has stopped, if this is the case.

However, having said that and having been invited too to attend, its upto the conscience of each person to genuinely attend or not to do so. In good faith I say. 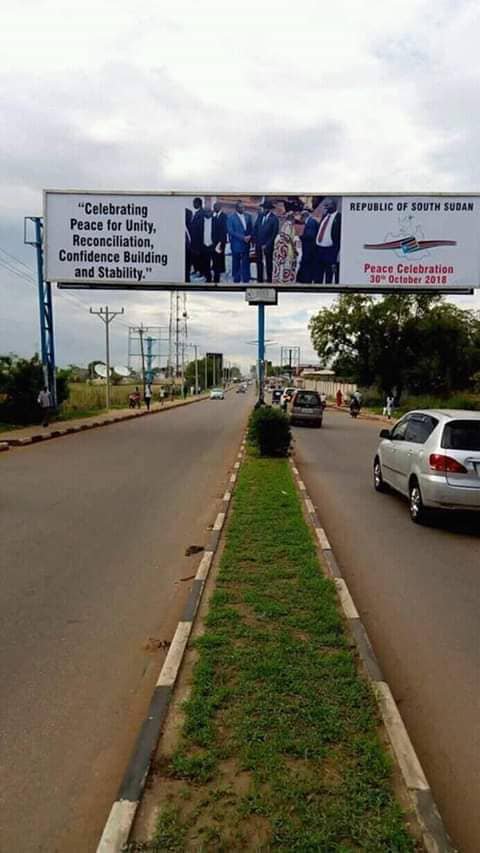 Personally, if you ask me, i really don’t think president Kiir should throw a big peace party at this moment. What he should do is use that 3 million dollars allocated for the planned celebration to take his five deputies around the country and talk to citizen and soldier, focus on cantonment, assure the soldiers that war is over, and structure the transitional government and start putting some meat on the skeleton that is the peace agreement. Then after one year of relative calm, on the 1st anniversary of the agreement, when we have put a bit of confidence in ourselves, celebrate and invite foreigners, when we’ve something to show for peace and stability. Celebrating now is to isolate the leadership from the people, to show that leaders only think of appeasing each other and nothing else.

I can assure you, this party is not going to appear as a celebration for everyone in the country. What we will be looking at on 30, or is it 31 now, is the lavish expense for just one day, while the soldiers are languishing in hunger, the children are still dying of malnutrition-related causes. What this party will mean to us is superficial policies and actions that lack deep thinking. It is not going to be a peace celebration, what peace? Did we forget peace is not just ink on paper? Why don’t we wait and celebrate only when we have something to show?

This is of course not to question the intentions of the president, just saying that good intentions have been known to take us into dark alleys. My one pence!

THE REVITALIZED [ARCISS] … WHAT NEXT AFTER THE PEACE CELEBRATIONS IN JUBA?

This is a pertinent question to the South Sudanese leaders both in the government and in opposition as well as to those standing on the side lines. I take this question from what Prof. Jok Madut said in his face book page on 27 October, 2018. It was about celebrating the revitalized peace agreement before the parties started the actual implementation. His concern that “celebrating now is to isolate the leadership from the people, to show that leaders only think of appeasing each other and nothing else.” I would wish that they only appeased each other but left the people in peace and in one piece.

I am puzzled more when different at cross purpose messages emanate from Juba. The government is saying one thing but the zealots in the SPLM are saying something different in the peace rallies they are conducting in the suburbs of Juba in the name of what they categorize as ‘sensitizing the people about the R-ARCISS.’ I would prefer to call it conscientization than sensitization. However, this is besides the message I wanted to deliver.

We are in the second month of the pre-transitional period to prepare the country for the transitional period, which begins in earnest on 12 April 2019. During this time, the parties should put in place the institutions and instruments of governance during the three-years transitional period. The celebration of the revitalized agreement takes place while violations to the provisions are taking place that raised suspicion and reluctance by some leaders of the opposition to go to Juba. Mind you President Bashir will have to assure the safety of Dr. Riek Machar and other opposition leaders in Khartoum who will accompany him to Juba.

I believe the pre-transitional period is time to build trust and confidence between the South Sudan political leaders bitter contesting the country’s leadership. The celebration in Juba should be the start of serious national dialogue among the political leaders since they have already agreed on how to share power. By national dialogue I don’t mean negotiations; rather I am talking about a political discourse to have a scientific and correct understanding of the fundamental problem of the people of South Sudan. I come from the political school or thought which attribute the social, economic and political crisis afflicting South Sudan and its people in their social formations is NOT power but poverty and ignorance consequent to their socioeconomic and cultural underdevelopment. All other contradictions like ethnic nationalism, corruption, insecurity, conflicts are secondary or offshoots of poverty and ignorance.

No doubt, had the South Sudan political leadership known this fundamental truth they would not have unleashed the civil war. It is therefore important that the leaders take time to study the situation and understand it well. I would call on President Salva Kiir Mayardit to take the initiative commensurate with his statement that he has forgiven all and sunder including those who have been writing about him and his government. He is the president of the country and therefore has all the power and authority to call the leaders of the opposition, including those who rejected the revitalized agreement, to a meeting to workshop and problematize the fundamental problem of South Sudan. The objective of such a meeting would be to come up with a political programme or plan in the social, economic and political domains, which the revitalized transitional government of national unity (R-TGONU) would implement during the three-year transition period.

The R-TGONU should really be an expression of unity of purpose translating into reality our people’s desire and yearning for peace. It should really be a genuine and a patriotic effort to put South Sudan back on its feet in the manner we struggled for liberation and its independence. South Sudan cannot afford again to waste away and remain the sick man of Africa. We have seen in the countries of the region, to which many of our people are refugees, that leaders are working hard to compensate for lost time and development opportunities. Therefore, President Kiir’s reasons for convening this leadership workshop is to prepare a transitional government that will deliver on something he and other leaders have agreed on. This means that the R-TGONU he will commission on 12 April 2019 will be a government with a plan of action and this will determine those who will be appointed to serve in those portfolios. It can’t be any other way.

The leaders of the opposition have a duty and responsibility to ensure the successful implementation of the R-ARCISS. Therefore, the question, what next? Is addressed equally to the opposition leaders. To appreciate its depth significance requires a change of attitude and a shift in political thinking. We can’t force President Kiir to change his attitude without a corresponding transformation on the other side. The destruction that has afflicted is a shared responsibility particularly for many of us who were in the SPLM/A and its splinter variants.

In conclusion, South Sudan is bigger than any individual, group of individuals or any single ethnicity. For those who strive for power, let us think critically and strategically how power could be used to serve the people than personal or ethnic ambition. Losing or not being in a position of authority is not in itself a limit situation. The most critical factors in the struggle for power and leadership are civility, ideology or knowledge and organization.