SAMPLE READINGS FROM CHINA’S NEW COLONIAL TRICK: WITH SOUTH SUDAN JUMPING IN WITH BOTH FEET!

After Britain had collatarised Chinese aids and guarantees with Hong Kong for 99 years, China has gained more experience than any country on earth on the intricacies of long term collaterisation of assets.

Philippines this year cancelled all Chinese aids. The president was in Isreal last week for new partnership in arms.

Zimbabwe is the second African country to default and will soon hand over a national asset.

Lamu port in Kenya, which was constructed by China on a Chinese loan of $16 billion, will see Kenya default in 3 years time and the biggest port in east Africa and adjoining towns will be handed over to China for 99 years.

Kindly note that in all these loans, no single dollar cash was handed over to the countries involved. In all cases, China will execute & build the projects (as is being done in our Abuja metro line project), using Chinese materials, equipment, technicians, etc that are all imported from China.

But you owe and they patiently work underground for your default to pay back the loan, through their crafty manipulation and sabotage of your economy. After 15-25 years, they repossess your assets and now determine for the next 75 years your import rates (in case of Kenya) or rail charges (in case of Abuja Nigeria)

In Nigeria: both the current FCT minister and Governor el Rufai of Kaduna who travelled with Buhari to China a few days ago, have sent word that they will spend extra days in China to sign off such rail financing loan agreements with China.

In Zambia: see a relevant news report below:

Signing a contract with China is like ascribing to the boiling frog effect; a fable describing a frog being boiled alive slowly. If you drop a frog suddenly into boiling water, it will jump out, but if you put that same frog in a vessel of water and start heating the water gradually, it will adjust its body temperature accordingly until it reaches a stage beyond its capacity and dies foolishly.

It’s rather pathetic how China is re-colonizing Africa by appealing to the ignorance and selfish interests of our leaders. Today, the Chinese are offering mouthwatering deals to Africa, both in cash transactions and the outmoded or rather defunct barter trade which seem very attractive on the outlook but dangerous in reality.

The Zambian government contracted the Chinese, lazy-thought and glossed over details thinking they were granting consent to genuine terms but the whole thing just morphed into modern day colonialism. China is now proposing to take over the Kenneth Kaunda International Airport should Zambia Government fail to pay back its huge foreign debt on time. The issue of whether Zambia posses the required economic muscle to repay that debt is in contention considering the amount involved. It’s typical of the Chinese strategy.

That moreover is not the only thing Zambian suffered from China; the Chinese own 60% shares of the Zambian National Broadcasting corporation which means, Chinese have an influence over what should or should not be premiered on their TV/Radio sets.
***

Register Now
South Sudan’s oil ministry signed a Memorandum of Understand with CNPC at the end of August which should lead to the Chinese oil giant expanding its current upstream footprint in the country, Gatkuoth told S&P Global Platts in an interview.

Under the MoU, signed ahead of the Forum on China Africa Cooperation (FOCAC) in Beijing last week, CNPC has agreed to consider new exploration acreage, increase existing production and train local engineers, he said.

“So they will be acquiring new blocks, possibly B1/B2…There is a commitment to get new blocks…By the end of the year I will announce the operators of B1 and B2,” Gatkuoth said Friday on the sidelines of an oil and power event in Cape Town.

A consortium of Total, Tullow Oil and Kuwait’s state-run Kuwait Foreign Petroleum Exploration Company (KUFPEC) were in on-and-off talks with Juba for years to explore and develop blocks B1/B2, which cover 118,000 sq km (45,560 square miles) in central South Sudan. The talks were finally dropped in late July after failing to agree on terms.

Drilling in the blocks has been limited so far but Gatkuoth has said he believes the areas hold a potential 1.5 billion barrels of recoverable oil. Total, which halted work in the blocks in 1985 after the resumption of Sudan’s decades-long civil war, estimates the reserves potential at 800 million barrels, he said.

South Sudan, which gained independence from Sudan in 2011 after a bloody civil war, is looking for investors in 11 exploration blocks to kick-start new drilling to replace its declining reserves. The country has faced headwinds due to investor concern over security in the conflict-prone nation. Militancy and tribal strife in South Sudan have largely thwarted hopes of restarting its main fields, which previously produced over 350,000 b/d.

But a peace deal with rebels earlier this year and the creation of a joint petroleum security force with Khartoum to protect oil infrastructure has lifted prospects on the ground. “Security is not an issue now. We have agreed with Sudan to have a joint security force to protect the oil installations…so that no activities can be carried out by anybody rebels, or anyone else,” he said.

The field, which straddles blocks 1/2/4 operated by DPOC, come on stream in recent weeks and is producing 20,000 b/d, he said.

Further short-term increases are dependent on rehabilitating other fields at the Tharjath Oil block 5 located south of Unity State.

South Sudan is one of 10 non-OPEC countries which agreed to support OPEC’s late 2016 deal to curb production. But the accord does not affect its output as volumes are recovering, he said. Gatkuoth also reiterated his interest in joining OPEC as a new African member by conceded that any decision needs to be made at the cabinet level.

“For me the desire is to join OPEC, so we [will] be a member of the OPEC family and learn from the experience…definitely we are interested,” he said.

Land-locked South Sudan is seeking new export options for its crude which is currently transported via Khartoum to the Red Sea. A long-running dispute over transit fees with its northern neighbor has sparked plans for local refining projects which are in various stages of planning and construction.

The current export route north via Sudan has sufficient capacity to transport up to 350,000 b/d of oil from South Sudan, roughly equivalent to its pre-2011 levels, he said. But if new oil finds are developed, and output exceeds 350,000 b/d, a new export route will be needed.

Gatkuoth said the preferred export option currently being explored is a 600 km pipeline south to connect with Uganda’s planned crude export line via Tanzania scheduled for 2022 “We are weighing our options, but linking with Uganda is actually the possible option now,” he said. “We can just link with Uganda and transport our crude particularly from the south.” He said previous plans to build a pipeline east via Ethiopia to handle additional production volumes had not been taken any further. “We have not yet done serious studies, it was just an idea.” Downstream, Gatkuoth said he still expected South Sudan ‘s first oil refinery will be operational by January next year.

Russia’s Safinat Caspian Oil Refining Company is currently building the refinery near the oil fields in Unity State which will have a 7,000 b/d capacity.

Bentiu is located in the Unity oilfields in Block 1, which is operated by the Greater Nile Petroleum Operating Company, or GNPOC.

The plant was due to come on stream in mid-2014 but South Sudan ‘s internal conflict has prevented the refinery from starting up.

The refinery will begin processing the domestic Nile Blend crude grade from Blocks 1/2/4 supplying mostly local industrial demand for diesel and gasoline, he said. Currently, all the country’s imports of refined products are supplied via Kenya. 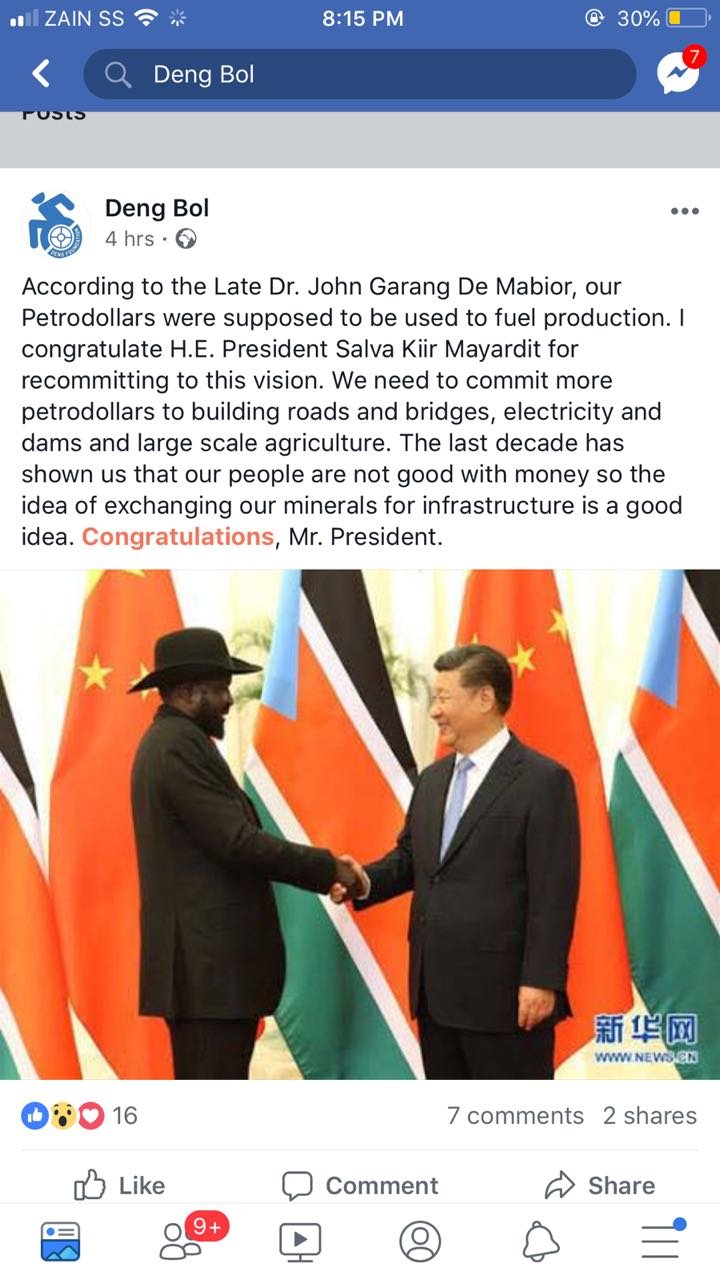 The Chinese government has agreed to build roads across the country in exchange for crude oil, says President Salva Kiir.

The agreement came about, during a sideline meeting between Kiir and his counterpart Xi Jinping at the China-Africa Cooperation Conference held in Beijing last week.

The summit aimed at strengthening friendship and promoting cooperation between China and African nations was attended by 51 heads of state.

“We agreed the road from Nadapal all the way to Torit and to Juba and again from Juba down the road to Rumbek and to Wau,” said President Kiir.

“We agreed that South Sudan will not pay them any cash but they will come with whatever they have from their money, they build the roads and we give them crude oil.”

President Kiir said South Sudan will pay China in crude oil to avoid funds from going into pockets of individuals.

“I decided that the infrastructure or whatever that we want to be done by foreign companies has to be done in exchange for crude oil because our people don’t want to see money. If they see money, their hands start shaking,” said Kiir, who was speaking to a congregation at St Theresa Cathedral in Juba on Sunday.

It is not clear how many barrels of crude oil will be paid for the road construction by China. 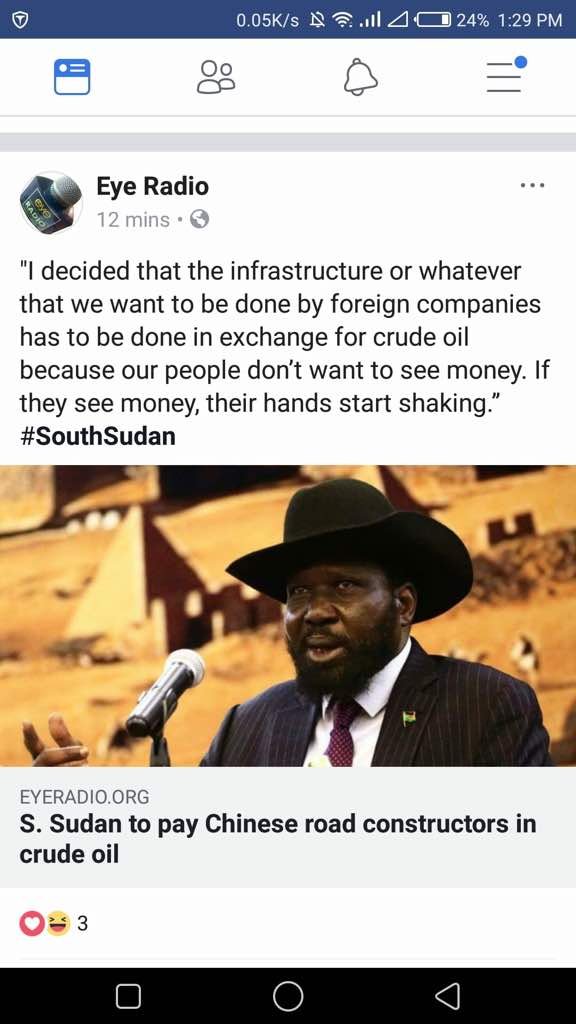