Canon Clement Janda is a South Sudanese veteran leader. He was the former New Sudan Council of Churches (NSCC) Secretary General and a current MP, who successfully brokered a deal between Dr. John Garang and Cdr. Salva Kiir and saved the Comprehensive Peace Agreement (CPA) from being hijacked into a full blow South-South war in December 2014 in the famous Rumbek Conference.

The Republic of South Sudan,

I greet you in the name of our Lord and Saviour, Jesus Christ. On the occasion of the Lent season, I have chosen to communicate to you on the important issue of managing our country.

As we are all aware you have been our leader for 13 years, since July 2005. As it is very clear the Country is worse off now than when you started it, there is no chance of the Country getting better than it descending deeper and deeper into the pit. For this reason, I am appealing to your Christian conscience to do what brave leaders do just like President Zuma of South Africa did and the Ethiopian Prime Minister. Please, my brother in Christ, resign now and leave another South Sudanese to take over the leadership of our Country. I appeal to you not to listen to the like of Michael Makuei and Martin Lomuro who would rather tell you “things are well’ when in fact nothing is going right.

I wish to remind you that you have never enjoyed a cordial relationship with Dr. Riek Machar right from the beginning. So no miracles will happen to allow you share power with him. So both of you must give South Sudanese a chance to move on without both of you.

Since in your scheme of mind any appointment must begin by thinking of a Dinka first, a Nuer second, and maybe a Collo third, if only people like Nathale Oluak were alive, (Do you recall a joke you told me in January 2010 at Yei airfield, about appointment of a Commissioner for Abyei? You said, “The Jallaba did not want a Dinka or a Nuer to head the Abyei Commission. If only Nathale Oluak were alive they might consider a Collo.” So you asked me if I was the angel the Jallaba would accept.

Since, therefore, any appointment must be given to a Dinka first, please pick a good and upright Dinka and hand the reign of power to him/her.

Please, do not give it to somebody who is anti-social, very selfish and is near you!

The world is watching whether to see that you are capable of salvaging something of your legacy as the leader who brought independence to South Sudan. But now is the time to give leadership to somebody who will bring peace and prosperity to South Sudan. I trust that you can take that bold step this Lent season of 2018.

Below is the scan copy of the full letter…: 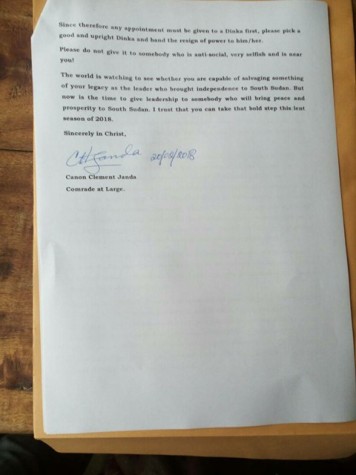 Disclaimer: AFTABOSS Internet’ional is neither hundred-percent certain of the authenticity of the letter nor is it associated with the content of the letter. Ours is to amplify the voices of the voiceless among our fellow netizens and citizens of South Sudan.