PEACE DURING THE DAY, KIDNAPPING AT NIGHT!

A few weeks ago I wrote an appeal that broke the ice about my husband Gen. Paul Malong’s house arrest. As you all know, the government through the presidential spokesman Mr. Ateny Wek Ateny, came out and denied that Gen. Malong was NOT under house arrest. However, this did not take away the questions surrounding Gen. Malong’s situation, prompting the government to go into panic mode. Even when tragedy befell our family with the loss of our daughter (Alakir Malong – RIP) in a school dormitory fire at Moi High school on Nairobi on 02nd September, Gen. Malong was not permitted to even provide a DNA sample to identify his daughter’s remains. Even after the body was painstakingly identified, and flown home for burial, Gen. Malong was still blocked from going for his daughter’s funeral.

Questions continued to be asked and at this point the government, or unscrupulous people within the corridors of J1 who see Gen. Malong as a threat to their maneuvers, realized that their denials have fallen flat, their lies exposed, and they can no longer conceal Gen. Malong’s illegal house arrest. All their efforts to bribe Gen. Malong’s loyal followers have failed, and so they have now resorted to come after him directly. On the evening of Friday 3rd November, a contingent of SPLA special forces came to Gen. Malong’s home with a piece of paper purportedly a presidential order for his transfer to an unspecified facility. However, Gen. Malong’s bodyguards stood their ground and resisted the suspicious order, whose letter head did not even indicate the office of the President or Commander-in-Chief (see attached).

The order also places more restrictions on Gen. Malong, stops him from receiving any and all visitors at his residence, not allow him to leave his residence, any one of his family members including his wives, have to seek permission before visiting him, all communication gadgets including phones and computers be confiscated and his bodyguards be arrested immediately. All this comes at the backdrop of a highly publicized government statement about restarting the peace process. Therefore, once more, the government is on the spot for saying one thing and doing the exact opposite, preaching peace during the day and at night, attempting to kidnap one of the people who is instrumental to the said peace process. 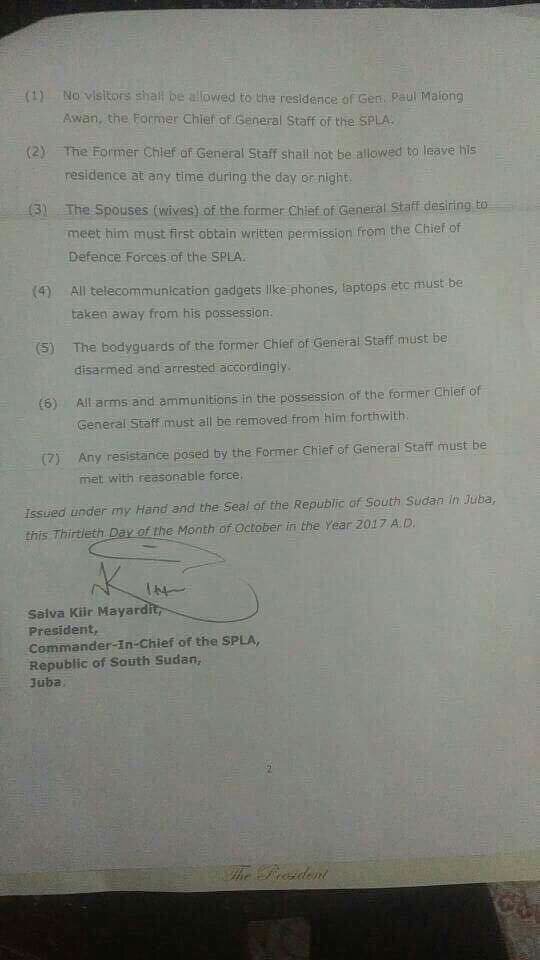 This morning (Sunday 05th) A family member have been stopped from going out to purchase food and water, even with money provided by the General himself. After all attempts to isolate him from his supporters have failed, now they have resorted to trying to starve him, which will also fail. Like I said earlier, Gen. Malong has done a lot for this country, and many people appreciate his contribution, and much as they have been numerously enticed with money and promises of positions to betray him, they have remained loyal to him. It is this kind of deep-rooted loyalty that puzzles the masterminds of the plots against Gen. Malong. I wish to inform these distractors that Gen. Malong’s supporters do not support him or stick with him because of money or positions, they remain loyal to him because they trust him, because he has been truthful to them, because he respects them, because he cares about them, something that is clearly lacking and unthinkable in the corridors of J1.
All these provocations have all been directed at Gen. Malong, to push him to the edge so that he can make a slight mistake to justify an all-out attack on his residence. It’s a shame that the entire institution of SPLA acts as if it is scared of one man, who is even under house arrest. But I can assure you, Gen. Malong is a thoughtful man, and as such he can see right through all your maneuvers. So this has also failed. Gen. Malong still stands firm and will engage anyone who comes to him with meaningful thoughts for a way forwards. To all my husband’s supporters, my humble appeal to you, as am sure it is my husband’s appeal, is that you to stay calm but remain vigilant, Gen. Malong remains steadfast and he has not wavered, even amidst the continuous provocation and persecution by people who are purportedly acting on behalf of the government.

Like I said before, my husband Gen. Malong has had a considerable contribution to the birth of this country and has been key to the survival of this government particularly in the post-2013 civil unrest. His contribution cannot simply be wiped out. Anyone who thinks that by cutting him off from the rest of the world, he will be simply forgotten, you lie to yourselves. I therefore argue the government, the regional leaders and the international community to intervene and bring to an end this impasse. As the AU and UNMISS delegation prepares to come to Juba on Monday, I appeal to them to persuade the President desist from handpicking the people he sees as “convenient”, and instead engage all the people who can be instrumental to the peace process in our country, including Gen. Malong.

For a peaceful and prosperous South Sudan.

The writer is a student of Leadership and Governance at the University of Nairobi, and wife to Gen. Paul Malong Awan, the former Chief of General Staff of the SPLA