How Salva Kiir is pawning South Sudan for his throne 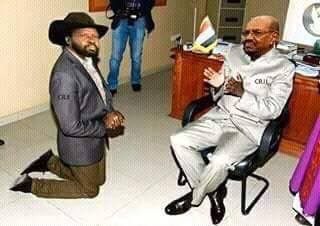 Time and time again, the president has blatantly betrayed the devil in him but he has always been ignored, supported and to a little extent given a lukewarm backlash, depending on the side of the political divide we fall in. It would be trivial to delve into all his past obscenities that undercut most of his public utterances and whose nature ranges from spewing divisive sentiments to controverting the sovereignty of our country. Let us specifically talk about the issue that is trending and its far-reaching implications; his recent statement which he made in Khartoum to wit;

“We have no any other better choices. The fact that innu South Sudan broke away from the Sudan was not really the most choice of everybody. But innu the majority what they decide in a democratic situation people have to go with it. Again innu whatever problems that happened in 2013 were uncalled for and we will want to put them to an end.”

It is not to say that this view I hold is monolithic, but as a law student, who has been furnished with the rules of interpretation, I pride myself in saying that I am highly placed to put this into the fitting perspective.

First of all, there is a slim chance that the president probably meant well but for lack of better words to make his point in that regard. However, it must also be borne in mind that this was an official statement made on a diplomatic podium, which, in all likelihood, was prepared beforehand and whose impact ought to have been weighed as to its intended results. There is a team in the office of the president that has been hired at a freaking high cost to do that job with due diligence. It is therefore futile and foolhardy for the one-eyed king among the blind of J1 to go on the official Facebook page of the presidency and lecture us on how Salva Kiir has suffered in the struggle and how he loves the country as the justification for the indicting statement when the damage has already been done.

Secondly, I strongly believe that Salva Kiir is a very wise man. His wisdom has clearly manifested itself in his ability to hatch and execute with success deadly and destructive plots which are as dark as a night so that he can continue to be president despite himself. At this point, I’m inclined to quote Captain Mabior Garang from one of our conversations, “the strength of uncle Kiirdit is when you think that he is stupid.” He is definitely not.Tellingly, he knows what he is doing and his words should not be taken for granted, more especially on crucial matters such as in bilateral statements like this. Therefore, the question that begs to be answered is: why did he say that?

Inasmuch as we are currently not at war with Khartoum, Sudan remains our greatest enemy with whom we shall have to settle many scores the hard way, or otherwise, in the long run. Only the unthinking lot will forget that we have Hofra El Nahas, Kaffia Kingi, Heglig (Panthou) and above all, Abyei that we are still disputing with the North and whose fate will most likely be determined by blood and iron. But simply because Khartoum is a perceived stronghold for the opposition, Salva Kiir has stooped so low to begging Bashir that they could be flashed out or kidnapped the way it has been in Uganda and Kenya. This is not just a critical claim, my evidence is in the in-depth interpretation of this statement, which hardly carries any word near peace.

“We have listened to your voice of advice that we should not allow any political groupings to be harbored by South Sudanese against the government of the Republic of Sudan. We will not do that. I believe that the same will not happen here, because this is where South Sudanese have ran to; they have run to Sudan in great numbers and other country that is hosting a great number of South Sudanese is the Republic of Uganda. But all of these, we believe that we will bring them back to our country so that we solve our problems once and for all.” 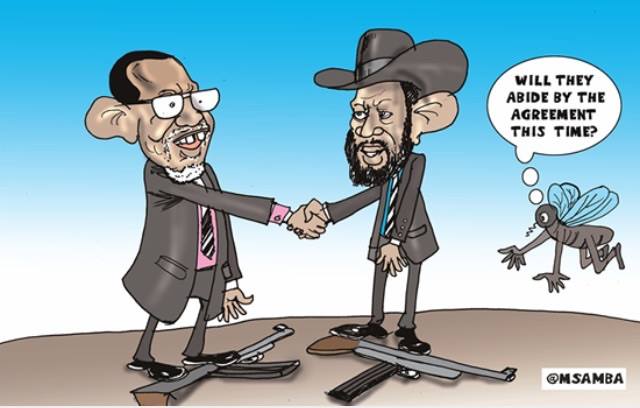 Coupled with the tone in which he put it, he just means literally handing over the oppositions wholesale, the price that is not equal to Abyei and the rest of the territories now being commandeered by Khartoum out of that power preservation desperation. I applaud that cartoonist (photo-chopped picture) depicting Kiir kneeling in front of his former — now recurrent — power master. The underlying problem is that this kind of un-statesmanly behavior stands to weaken our future position in the further negotiations with Khartoum on those demarcations.

Given the way the independent South Sudan is being governed to betray the rest of the yet-to-be liberated Africans of the Sudan, my heart bleeds for my maternal uncles, the Nuba liberation fighters, who poured their blood in South Sudan and now still pouring it (almost in vain) in Sudan. By poetic justice, the blood of the thousands of other African-Sudanese that has been ‘conned’ by the likes of Salva Kiir will haunt them historically.

That being said, Salva Kiir will do anything, even pawning the whole country for thirty pieces of silver, simply to protect his throne. If this gross treachery does not concern you as a citizen of South Sudan, I don’t know what else will!